GOD: DO NOT TELL GOD TO SHUT UP!

BEN: As I was saying.

BEN: The house caught on fire, Nancy has cancer, Amy is sick with whooping cough, James is broke, and Daniel still doesn’t have a girlfriend-

GOD: I’m just saying he could have asked for my help!

BEN: Well, you know he’s atheist, I’m sorry. I’m sorry he offended your compassionate little heart there, but uh, yeah, no use convincing him…(winces) ..like I said God, we’re not all that clear in our heads… I mean, I just really want some peace and quiet. Something that will let me know that this  string of horrors is going to be over and I can reassure myself that you exist.

BEN: I know, I know. but I’m older now and…I mean..I think everyone gets doubtful once in a while.

GOD: What’s there to doubt?

BEN: I don’t think you’d understand it, God. it’s a…it’s a mortal thing. We- cling to our senses and what our mind tells us and nothing else. It’s why I’d still like it if you helped us out more…

GOD: Son, have you ever heard the phrase “everything happens for a reason” ?

GOD: I’m just saying, maybe you should start thinking about the divine purpose behind everything that goes on in your life.

BEN: Arrrgk, stop with all the philosophy! I just wanted to complain, just wanted some answers- I didn’t want a lecture. But, of course, I knew I wasn’t going to get it anyway, so what was I thinking?

BEN: Yeah, have a great one.

the trodden are down on their heads and are spinning

they are clamoring up on their tip toes and shouting

like a soft petal of rain in the ornery bushes?

what is the name of my gods?

what is the name of my god, for Pete’s sake?

you churn butter and you tore the street apart but you never listen to me when i speak,

you don’t need to call me that

you can just call me mother or darling

or kiss me like you did when the world was new and we had nothing to do and I was only three (or was I two?)

and you saw the stars as they shone through

we were just satisfied to be fully ourselves

but the knob on the door was mine always

and I knew that love was never just around the corner.

and i found myself broken up on the sand

and looked to the edge of the water

fearing that the sea moss was clearing

knowing he was never as endearing

as the sea moss that cradles my breath.

it is like a tangled up teal bed frame

that i cannot sleep on,

into an unshakable hurdle.

would i keep hold of the

balancing I had done

on one leg in the water

when seeing his gray body bloodied

through an invisible glass

that could not shatter?

when thought of mechanically

(smiling till my teeth grind)

We do not exchange farewell glances

even though that’s what i want to do

with the tips of our bare fingertips,

but swimming visibly close if seen from above.

the sea moss leaves me now,

in a huddle of whispers,

and i do not know where to go

and there is nothing here that breathes

and there is nothing here in sight 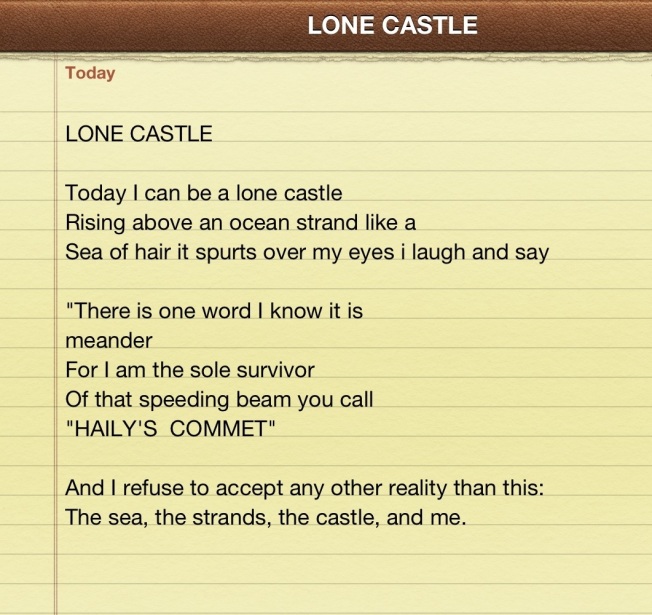 In the August fog:

of mud, and dry leaves.

and we will wait again,

and  all these soft and silent waiting evenings are being

ironed out on the porch

in the August fog.

We wait, and we wait

(an abandoned curtain is playing on the cornfields)

waiting to be seen.

to put me back onto that Great Stage

and give me a shove.

as proud as me!

(and I was likened to the scent of darkness

for as we passed the  gray stone towers

I was fully fine to listen to

the songs they chanted after me

“STILL BURNING AS WE WAIT?”)

But still we wait, and wait again,

and all these silent waiting evenings are being

ironed out on the porch in the August fog.

Not my usual style, but it’s cool. I wanted to experiment with repeating ideas, images, or lines in a poem. I think it’s pretty cool, even if the meaning is kind of obscure. Tell me how you interpreted it!

her capacity for silence

was admirable. The cobblestone

She draws out another long breath

from her lungs. Another long day,

she feels, she knows,

she knows it without ever thinking it.

And beneath the dark steps to her

a box encrusted in diamonds

is broken and the ghost knows that he broke it.

Her capacity for silence is haunting

she has been still for several days, feeling the minutes

feeling and knowing without ever thinking  it.

She draws out another lung from her breast.

the shapes of the farmyards blur into

green and pink mesh when she tries to remember

because she looks down at her shoes when she walks.

And beneath the dark steps to her shotgun house,

breathes in her perfume-from-a-jar, and only

the ghost who broke it knows that he did it.

her capacity for silence

no, no, says the poet

Stay until my typewriter resets

and the sun repeats it’s hanging

and the moon repeats her execution

we will dismiss the countryside

half of the time forgetting that it is there.

I don’t think my hands have ever typed so fast! the rhymes literally poured out at a rate I was not sure to keep up at. i was possessed. utterly possessed. And I have just finished reading Joan Baez’s first autobiography, I don’t know if that helps…

who was who was pooh was greatly appreciatledy do

you were my love

you were my everything

you were my grass to my hay

my laugh to my chuckle,

my seat to my buckle

my trough to my stream

my laugh to my scream

you are were is my everything

selling things so you can have food to eat

you know you is my everything

or our silent meditations

like your mind saying, no , you must, you must

that says there is no tomorrow

what’s the point of living,

I find myself saying

when everyone is already dead?

OH MY GOODNESS THESE ARE SO HARD TO MAKE BUT I DID IT!!!! Basically the poem reads one way forewords, and has an opposite meaning when read backwards. the form was started by a woman named Marilyn Singer, who has written two books of these poems for children. Her husband suggested they be called “reverso” poems, and that is exactly what she did. The books are  absolutely genius-check them out! The first book is called “mirror, mirror” and the second is called “follow follow”.

I am a cave among dwellings
surrounded by boulders.

I want to stutter and shake in defiance
but I am forced into silence.
The rocks drop on me, birds fly Jauntily
lifting me vainly
back to the ledge where I have fallen over thousands of times with the rocks.
Birds,
are you still trying to help?

Might I ask, birds, if the wind has ever lifted you up on bubbles
and you heard a swift voice through the air
or felt the angels ?
I’m just wondering
just wondering if maybe the rocks aren’t really falling.
Maybe I’m just being reborn,
again and again.

Look at all these awesome people who follow me